GRAZIA IN ITALIAN MEANS “grace,” a name that restaurant owner Adrian Hembree is completely committed to living up to. “We’re a community driven restaurant, which means that pretty much 110% of what we do goes back into the communities that we serve.”
Aside from offering great food, Grazia offers a lot back to the community; things such as holding bene ts for local softball teams and the Lions Club. Adrian says that between the Pearland and Clear Lake locations of the restaurant, they raised around $200,000 in 2017 to give back to the community.

They even set up a taco drive to benefit the victims of the recent Santa Fe High School shooting. The idea for the taco drive actually came earlier, in 2016 when he wanted to do a bene t for the family of a Pearland of cer who was killed by a drunk driver. 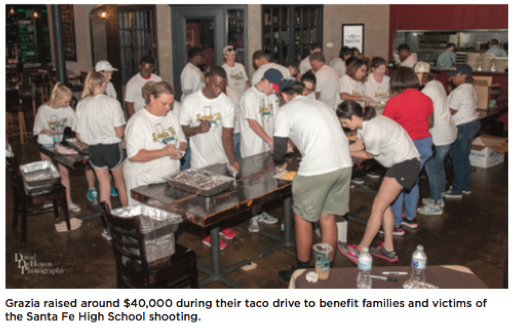 “The idea was simple, it was the catalyst to have something bigger,” Adrian said about the event, adding that between their $5 tacos, a local woman selling shirts and other donations, they raised around $40,000.

Adrian’s restaurant does more than serve the community; they also serve unique dishes that he likes to call “Gulf Coast Italian” because of the way he married the favors from the local area and classic Italian dishes. “It’s a little favor of home, with a lot of favor of Italy.”
The menu features items like Cajun dusted scallops, red sh with a craw sh cream and lasagna wrapped into egg rolls. The important question is, what does Adrian recommend?
“I have a fail-safe dish called tortelacci, and it’s pasta stuffed with short rib meat.” He also says that their short ribs, which won three awards at the Rodeo Best Bites in 2016, are a must. “Usually if you’re lucky enough to come away with one belt buckle you did well, and that year we came away with three belt buckles.”

But the Mike & Jen, so named for his brother and sister-in-law because Mike is the person who came up with the idea for this dish, and while Adrian thought it wouldn’t work, it is now the best seller on the menu! Just don’t let Mike know, Adrian still tells him it doesn’t do very well. To give himself a little credit for his own menu, he says you can’t miss out on the Adrian’s Art Pizza, which is a pizza topped with all of his favorite toppings – including wagyu meatballs and house-made Italian sausage.
Adrian himself has never been to culinary school, but he has worked his way up through multiple Italian restaurants. He gained a love of cooking from a home economics class in high school, where he first learned to make pizza, a recipe his parents still use!
He learned to cook partially from two Italian men he met at his first job, an Italian restaurant, in college, and partially through product development training through previous jobs. He calls himself “a product of the street” in the kitchen.

When people come to his restaurant, he wants them to feel comfortable and welcome. “What’s important when we meet a first time guest is that they feel like family.” He adamantly shares his appreciation for those who choose to dine at Grazia. He said he wants a visit to Grazia to feel like a visit to Grandma’s house, where you get a warm and caring feeling.

“When ya leave Grandma’s house you’re not just saying ‘bye grandma’ and jump in the car, it’s a hug, you know.”